Ogoun Kyu's endless talking has not made it any easier for the others to understand what drives him. An ally to the Roots, he seems to spend most of his time criticizing them. Convinced he can perform Loa Voodoo magic, Ogoun Kyu tries desperately to cast spells on the clan's enemies. But as it's a hit and miss affair, he usually has to rely on his bare fists to do the job.

Level 2 (Redesign)
Add a photo to this gallery 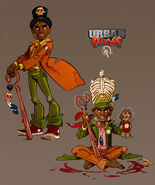 Promo
Add a photo to this gallery
Retrieved from "https://urban-rivals.fandom.com/wiki/Ogoun_Kyu?oldid=70312"
Community content is available under CC-BY-SA unless otherwise noted.