"In order to bring about a change in civilization, you need an idea, an idea that will germinate and develop for the good of Mankind… "To free science from the yoke of the economy and invite the true creative minds of this world to come together for the future of Humanity…" All this is written in the Riots Code by Aristide Pericles, great thinker of the last century and founder of Riotspolis. Having conquered death with the help of Dr Copernica Senior et the Van Wesel family, the Riots' Patriarch is now ready to enlighten the world…for all eternity! 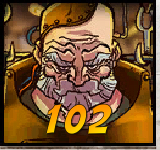 Pericles Avatar on Urban Rivals
Add a photo to this gallery
Retrieved from "https://urban-rivals.fandom.com/wiki/Pericles_Mt?oldid=67251"
Community content is available under CC-BY-SA unless otherwise noted.