Welcomed by the Sakrohms as the Angora messenger from the Red-Melba-Bigue star system, while seen by others as a simple runaway prisoner from the 588 Zone, Phonos plays a double game. On the one hand, he teaches the art of joviality through the use of the Sakric index, while on the other, he smoothly eradicates the Aliens that have infiltrated planet Earth... 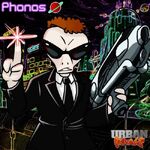 Retrieved from "https://urban-rivals.fandom.com/wiki/Phonos_Cr?oldid=61033"
Community content is available under CC-BY-SA unless otherwise noted.