Prince Jr reigns supreme over the Clint City boxing scene. In his office on the top floor of Borgia's Palace, it is he who decides who will win and who will lose before heading down to the ground floor to place his bets. In over thirty years in the job, he's only ever slipped up once and since then there's been a price on Hammer's head among the Montana. 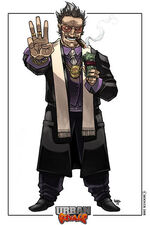 Retrieved from "https://urban-rivals.fandom.com/wiki/Prince_Jr?oldid=68001"
Community content is available under CC-BY-SA unless otherwise noted.