If you had to choose one man to sum up the techno-priests, it would most definitely be the great Rahi Sledon. Having theorized and synthesized crystal glass with the help of XU66, the scientist has changed the face of the Vortex army! He is the creator of the great Dregn's royal armor. However, this eminent genius of evil would much rather spend his time studying crystal-based life forms. His first projects, C Wing and C Blade, were very promising and despite the relative failure of Ward Hg, he is now working on a new C category project that is even more destructive than C Beast. Code name: Dusk. But to do this, he must have access to the GHEIST laboratory because, as we all know, if you want something done right, you'd better do it yourself… 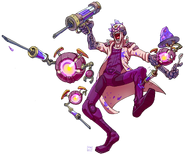 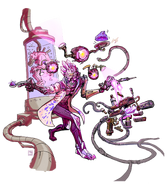 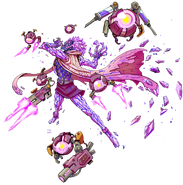 Level 5
Add a photo to this gallery
Retrieved from "https://urban-rivals.fandom.com/wiki/Rahi_Sledon?oldid=69422"
Community content is available under CC-BY-SA unless otherwise noted.