Originally from a small village in the Saudi desert, the distinguished yogi, Ramath, was both the village chief and holy man. So, when his community was struck by famine, Ramath left the desert in search of a place where he could exchange his talents for hard cash to help feed the village inhabitants and begin its reconstruction. The Freaks' circus, who were on the look-out for a fire-eater, caught his attention. Especially as the circus was very close to the site where a tournament with a huge cash prize, named the "Iron Mask", was soon to be held... 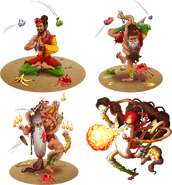 All levels
Add a photo to this gallery
Retrieved from "https://urban-rivals.fandom.com/wiki/Ramath?oldid=66856"
Community content is available under CC-BY-SA unless otherwise noted.