When a plane taking prisoners from Clint City to a new jail mysteriously disappeared, the Government was quick to hush it up. The truth is that following a strange breakdown, the plane disappeared into thin air in the Saudi desert to later crash in a lost world where Jurassic wildlife still prospered. Forced to come together under the leadership of Clint City's two most notorious criminals, the surviving prisoners battled against the hostile environment and ended up climbing the food chain. Now united under the name of the Raptors, the prisoners are back in town with lots of new "friends". They know full well that their plane was sabotaged and no law is going to stop them in their quest for vengeance!

Cancel Opponent Attack Modifier - Any modification to the opposing character's attack will be deactivated. This applies to attack reductions AND increases. This effect is not a Stop Ability or a Stop Bonus. Please not that the attack gained by your opponent through playing Pillz does not constitute a modification. 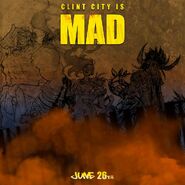 Game background for their release.

Retrieved from "https://urban-rivals.fandom.com/wiki/Raptors?oldid=71080"
Community content is available under CC-BY-SA unless otherwise noted.