Being a girl skate-boarder is tough and being in the Bangers is certainly no easy ride. But being a girl skater with the Bangers is frankly attempting the impossible! But Raquel has developed a special fighting technique with her skateboard that she can switch from a means of transport to a lethal weapon and in doing so, has finally earned the respect she deserves.

This card hasn't appeared in the web comic yet. 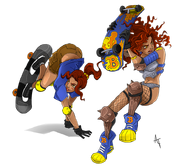