When he had to make some hasty repairs to the bow of the boat off the Los Santos coast, Ulrich had no idea that the driftwood he'd collected contained an imprisoned sea god. Rekved the Cursed shot up out of the bow and immediately set to work on giving the boat a complete facelift so as to prove his worth as a marine demigod. Not overly surprised by this turn of events, Bloodh left him to it as, who in their right mind would turn up their nose at a new divine crew member, especially one who's prepared to work for free? 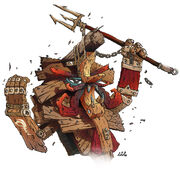