When you sign up, you'll receive your first 8 Characters free of charge. At each level, a character is defined by its Power (P) and Damage (D). Some characters also get a special ability when they reach a certain level.

All of this information is indicated on the character's card. 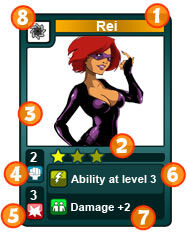 (5) Damage - Damage is how many life points you will take away from the opponent.

(6) Ability - Abilities can be anything from helping your card win the round to applying Poison or reducing the enemy's Damage.

(7) Clan Bonus - If you have 2 cards of the same clan in your hand, their Clan's Bonus will be activated.

(8) Clan Logo - The picture of the Clan the character is in.

Cards get XP which is then used automatically to level up cards to their final level. The ammount of XP needed per level is shown below.

A player gains XP when they level up their cards, hence why cards that aren't fully upgraded sell for more Clintz on the Market.

Retrieved from "https://urban-rivals.fandom.com/wiki/Rules?oldid=57355"
Community content is available under CC-BY-SA unless otherwise noted.