What do you mean yo-yoing isn't a sport?? If you’d rather not be punched in the face, you'd better not say that kind of thing around Saki. At the tender age of 16, this young Asian Lady is already triple world champion in artistic yo-yoing and continues to astound the judges with mind-boggling tricks such as "The Supreme Koroshikon" or "The Ultimate Ayakumi” also known as “The nose-breaking sequence".

This character hasn't appeared in a web comic. 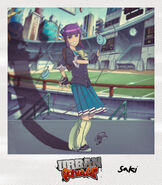 Level 2
Add a photo to this gallery

Retrieved from "https://urban-rivals.fandom.com/wiki/Saki?oldid=59859"
Community content is available under CC-BY-SA unless otherwise noted.