Zlatar Cr's niece doesn't much like class and definitely prefers to party. But to make sure she still gets good marks, Sasha's got no qualms about using her mental powers to convince the boys to do her homework for her. Weirdly, the girls are completely immune to her charms… 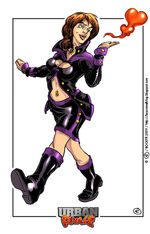 Retrieved from "https://urban-rivals.fandom.com/wiki/Sasha?oldid=66002"
Community content is available under CC-BY-SA unless otherwise noted.