Orphan Scott grew up in the streets, making ends meet as best he could through sheer cunning and a general lack of scruples... He could have ended up very badly were it not for his aunt Kerry, a highly influential member of the Rescue clan. Thanks to her, he now has the chance to put his talents to good use at the service of this clan. But will he be able to prove his worth despite his notorious lack of discipline?

LV 4.
Add a photo to this gallery 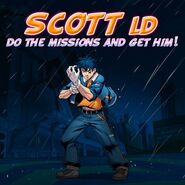 Scott in the official manga.
Add a photo to this gallery
Retrieved from "https://urban-rivals.fandom.com/wiki/Scott_Ld?oldid=68842"
Community content is available under CC-BY-SA unless otherwise noted.