Sentenza always finishes the job, provided you have enough Tokenz to offer him. As a ruthless mercenary, talented torturer and interrogator with a knack for persuasive brutality, he became the judge's right-hand man who now prefers this sociopath's methods to Marshal's common sense. If Tuco hadn't crossed his path that day, pretending to be a Confederate soldier, he would certainly not have been left for dead by the roadside… And if only Spyke had managed to dodge his fists, he would probably have stayed in Clint City… With the new currency circulating in town, and since he is in great demand in the upper reaches, the brute referred to as "Angel Eyes" knows he is in for a few lucrative contracts! 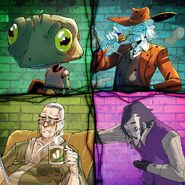 Add a photo to this gallery
Retrieved from "https://urban-rivals.fandom.com/wiki/Sentenza?oldid=65022"
Community content is available under CC-BY-SA unless otherwise noted.