Sent back to the past to protect her creator's ancestor from the terrible Vortex, Sera M1 would have been the perfect war machine… had it not been for her creator's misplaced information about the modern world. Based on an old cartoon character, Sera is probably the world's most conspicuous robot. So when she confronts the Vortex armada with her glitzy jewelry, little mechanical friends and molecular shotgun wand firing rose particles, she is not taken very seriously. And it is with some reluctance that Lena finally decides to accept this "gift" from the future. 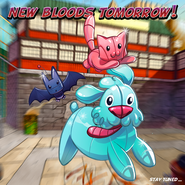 Level 5
Add a photo to this gallery
Retrieved from "https://urban-rivals.fandom.com/wiki/Sera_M1?oldid=59914"
Community content is available under CC-BY-SA unless otherwise noted.