Fiercely proud of his Asian origins, Shogunn's talents as a rapper are yet unheard of by the general public, although Blaaster pumps out his sounds night and day. So rather than join his big sister Linda in the Fang Pi Clang, he's decided to use his talents to become a veritable Hip Hop samurai. 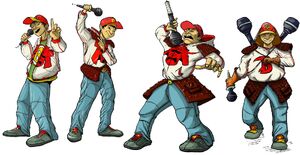 Retrieved from "https://urban-rivals.fandom.com/wiki/Shogunn?oldid=60119"
Community content is available under CC-BY-SA unless otherwise noted.