Despite a diet consisting of kebabs and pizzas and a yearly subscription to Gyro’s, Sleam just can’t seem to put on weight and although he dreams of an XXL physique, he seems forever destined to be trapped in a size Small body. But never fear, he hasn't given up yet and one way or another he’s determined to fulfill his dreams… 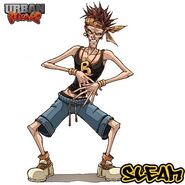