Daughter of a trapeze artist and a lion tamer, Svelthlana spent her childhood in a traveling circus. One day, the circus stopped in Clint City, for a one-night show. Svelthlana seized the opportunity and snuck off to visit the big city but she never returned to the circus...

Svelthlana has had two main roles in the official comic. First was "Treasure Hunt" where she was with a trio of performers (with Splata and Zoltan) but left because her career was going nowhere and teamed-up with Hawkins Cr to find a hidden treasure. She would later join Havok's B-Team to help find her new leader, Charlie Cr, after the Uppers kidnapped her.

LV 3.
Add a photo to this gallery 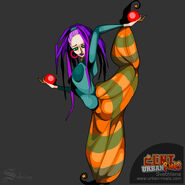 LV 3.
Add a photo to this gallery

Retrieved from "https://urban-rivals.fandom.com/wiki/Svelthlana?oldid=65460"
Community content is available under CC-BY-SA unless otherwise noted.