Having noticed that his pirates were having trouble getting their heads around the idea of self-discipline and that they were still turning up late for meals and not making their beds in the morning, Bloodh decided to hire Taljion, an experienced bruiser, and together they’ve put in place a series of punishments that has produced fast results.

Taljion is best used in Mono Piranas so he gets the full Attack +12 since his ability is Support: Attack +3 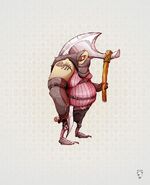 Retrieved from "https://urban-rivals.fandom.com/wiki/Taljion?oldid=59042"
Community content is available under CC-BY-SA unless otherwise noted.