Kidnapped by the Sakrohm's Siberian branch to be offered as a slave to Guru, Wanda managed to escape from the Gulag. Determined to make those "Horrendous Pigs" pay, this hot-blooded, cold-hearted tigress is ever-ready to defend the Pussycats. After all, they were the ones who picked her up when she was wandering aimlessly through the tundra. 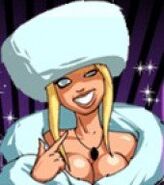 A fan art of Wanda
Add a photo to this gallery

Retrieved from "https://urban-rivals.fandom.com/wiki/Wanda?oldid=55136"
Community content is available under CC-BY-SA unless otherwise noted.