Willow's childhood was spent firmly attached to Sunnygoat's apron strings, listening to her talk of love for the flora and fauna, spiritual union, inner paths and so on. However, despite her proximity to the trees, Willow never experienced the harmony her mother spoke about, which is why she's agreed to try Jeto's latest recipe. And now Willow is literally as one with nature.

Lv 2
Add a photo to this gallery 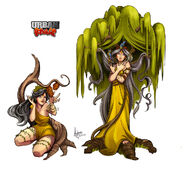 All levels
Add a photo to this gallery
Retrieved from "https://urban-rivals.fandom.com/wiki/Willow?oldid=68225"
Community content is available under CC-BY-SA unless otherwise noted.