Clearly none of her fellow prisoners thought Zaria would last more than a day in the prehistoric hell they'd landed in. It has to be said that Zaria had been locked up instead of her boyfriend for a crime she hadn't committed and was not naturally a very combative person. Fortunately, in extreme and desperate situations one's survival instinct can suddenly kick in to reveal a true force of nature. Reappearing in the survivors' makeshift camp a week after the crash, she took on a ferocious raptor with her bare hands and subjected it to her will. Of course this show of strength earned her the definitive respect of the most hard-faced of her fellow convicts. The fragile prisoner was all but dead and gone and in her place a merciless warrior had been born!

Zaria (who has teal hair) has a non-speaking part in "A Plane to Hell" where she is seen, scared out of her wits, on the plane and later tries to keep another prisoner from falling out when it explodes. 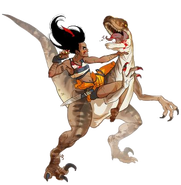 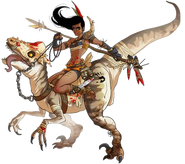 Retrieved from "https://urban-rivals.fandom.com/wiki/Zaria?oldid=67964"
Community content is available under CC-BY-SA unless otherwise noted.